Skip to main content
Please note that the Waswanipi MSDC is closed until January 31st, 2022.
Mistissini pharmacy hours are as follows until further notice. >> 11 am to 6 pm Sunday to Friday and closed on Saturdays. <<
Related content
Pharmacy
Public Health needs your help for contact tracing. Our team can no longer call ALL contacts of positive cases because of high numbers and staffing shortages.
Related content
How you can support contact tracing
COVID-19 pandemic continues to pose a threat to the population. Please limit your contacts.
Related content
COVID-19 Update for Eeyou Istchee
Summary

Childbirth with midwives returns to Eeyou Istchee after an interval of more than 25 years.

On Friday, September 7, 2018, the Cree Board of Health and Social Services of James Bay hosted a Blessing Ceremony in Chisasibi to mark the realization of a long held dream of the Cree Nation: the return of childbirth with midwives to the Territory after an interval of more than 25 years. During the ceremony Cree Health Board’s midwives were guided into a specially constructed saptuan by traditional midwives in their 80s and 90s.  New services for pregnant women and young families. Pregnant women in Eeyou Istchee, starting in Chisasibi, will soon be able to be followed throughout pregnancy, childbirth and the post-natal period by one of a team of three Midwives, all members of the Ordre des sages-femmes du Québec (OSFQ). Expecting families will also have opportunities to receive Waapimaausuwin teachings: Eeyou/Eenou cultural teachings on pregnancy, childbirth and baby care. Birthing homes will be built in three communities: Chisasibi, Waskaganish and Mistissini.

For more than two decades, women in Eeyou Istchee have had to leave their home community to give birth. More than 350 babies are born every year to Eeyou/Eenou women living in the nine communities of Eeyou Istchee, (total population 18,057). Chisasibi Hospital, the only hospital within the Territory of Eeyou Istchee, is a small facility. Women living in the “Inland” communities of Mistissini, Oujé-Bougoumou, and Waswanipi are relatively close to Chibougamau Hospital, which is where they normally give birth. For women living on the coast of James Bay (Whapmagoostui, Chisasibi, Eastmain, Wemindji and Waskaganish) and in the isolated inland community of Nemaska, the nearest hospital obstetric ward is Val-d’Or, a distance of 600-1,000 km. Several weeks before their due date, women from these communities leave their family behind to travel to Val-d’Or. Living in a boarding home in a culturally unfamiliar city, separated from their families, they wait for labour to begin. “It is an experience which echoes residential schools,” stated Bella M. Petawabano, Chair of the CBHSSJB and a specialist in maternal and child services. Petawabano has championed the cause of returning birth to the Territory through years of groundwork and planning. “They said we could not do it,” she said in welcoming remarks at the Blessing Ceremony. “We have done it. We have brought childbirth back to Eeyou Istchee.” The profound importance of being able to give birth within the Eeyou/Eenou community in the context of decolonization and cultural safety was a subject explored in depth by the Public Inquiry Commission on relations between Indigenous Peoples and certain public services in Québec: listening, reconciliation and progress. On June 14, 2018, Laura Bearskin, Assistant Executive Director of the CBHSSJB for Nishiiyuu, the department overseeing the project from a cultural perspective, and Jessyka Boulanger, Head of the Cree Health Board Midwifery team, were among the expert witnesses who testified before the Commission about the relationship between giving birth on Indigenous land and culturally safe care. “Our vision is to revive and restore our practices and embed indigenous knowledge, Eeyou and Eenou knowledge, within our services,” said Laura Bearskin during her testimony.

Giving birth with midwives in Eeyou Istchee means to bring back the babies into the fold of their families from the beginning of life. It is also the way to revive the ceremonies around birth that haven’t been practice for decades. It is to restore what used to be there before: the knowledge developed by the Eeyou and Eenou people to foster good health for the women and babies. The Waapimaausuwin Guide is a compilation of the traditional knowledge of Elders on subjects like healthy pregnancy, nutrition, baby care and breastfeeding. The new midwifery services and Waapimaausuwin teachings provided by the Elders will go hand in hand with existing pre- and post-natal services offered by the Cree Health Board’s Awash (maternal and child health) clinics, including prenatal visits, nutrition counselling, breastfeeding support. ‘’We are building a collaborative practice approach that is women and family centered and culturally appropriate.” stated Jessyka Boulanger. The services will comprise complete maternity follow-up including birth and postnatal until 6 weeks for healthy women having a normal pregnancy by a midwife. “We want to support women’s trust in their body and their ability to choose for themselves,” continued Boulanger. “It will be a shift for normal pregnancy and birth as a medicalized event to a spiritual, mental, emotional and physical passage rooted in Eeyou/Eenou land and culture.”

“Keeping women close to home is the key to cultural safety,” stated Daniel St-Amour, Executive Director of the CBHSSJB. “This is achieved through strengthening services in the community and also using telemedicine to bridge distances between remote communities and urban hospitals which offer a greater range of services. With high-speed internet links, women can have ultrasounds at Chisasibi Hospital, and an obstetrician in Val-d’Or is able to see the images in real time.” As partners, the Royal Victoria, the Montreal Children’s Hospital and the CISSS of Abitibi-Temiscamingue obstetrical and pediatric teams will be available for consultation and transfers if needed. Women having a high risk pregnancy will still have to give birth in a hospital with surgical capacity, such as Val-d’Or, but they will also have the opportunity to receive childbirth preparation by a midwife and receive Waapimaausuwin teachings.

On August 17, the Ministry of Health and Social Services of Quebec, after reviewing the detailed clinical plan and budget for the new services, granted authorization to the CBHSSJB to proceed with the design and construction of three birthing centres, to be located in Chisasibi, Waskaganish and Mistissini. The centres will provide a comfortable, home-like environment for women and their families during labour and childbirth. “The launching of these services is a major, historic achievement which was made possible by having our whole organization and our governmental and community partners pulling together to achieve an ambitious vision. It is a proud day for the Cree Health Board,” stated Executive Director Daniel St-Amour. 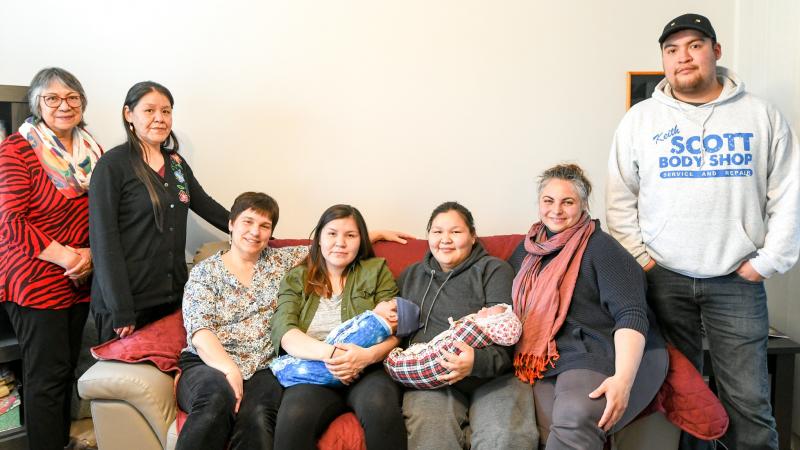 The start of midwifery services in Chisasibi is a major milestone in the CBHSSJB’s project to bring birthing back to Eeyou/Eenou Istchee.