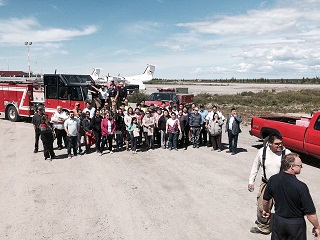 In Chisasibi on July 6, 2016 a simulation training exercise was held to test the capacity of the community to respond to a major emergency.

The emergency simulation, spearheaded by Chisasibi Airport, involved a scenario of a plane crash with 18 casualties. For the hospital, this was a "code orange" simulation to test the hospital's ability to triage and provide medical assistance to a large group of casualties arriving at once.

The training exercise was a collaboration with Chisasibi Airport, Cree Nation of Chisasibi, First Responders with the Fire Department, Air Creebec and Police. 22 community members, all volunteers, played the role of crew and passengers in a downed aircraft, using make-up to simulate injuries. The youngest volunteer was 9-year old Deandra Spencer.

Chisasibi Hospital maintained essential services throughout the exercise. "We had 8 real patients who arrived while the simulation was going on, a couple of them in serious condition," said Jason Coonishish, head of Prehospital and Emergency Measures for the CBHSSJB.